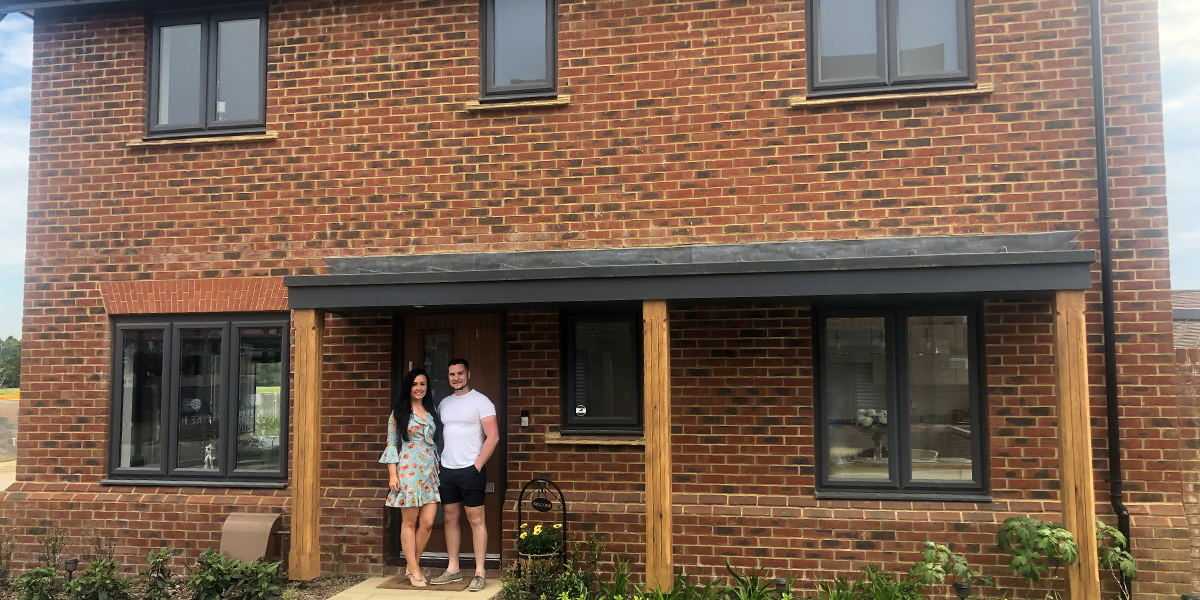 A fresh start for first time buyers at Woodgate

Dan and Rachel Vandyke were renting in South Croydon while saving a deposit to buy their first home and escape urban life.

Moving from City to Countryside

“We were both living and working in London and just wanted a better life balance,” said Dan, “but we still wanted to have good links to London or Brighton. As soon as we discovered Woodgate, the new homes by Thakeham in Pease Pottage, it just ticked all the boxes. It’s so easy to get to London, either by driving straight up the M23 or taking the Thameslink from Three Bridges station which gets you into London Bridge in 35 minutes.”

Moving to the countryside, although still within easy reach of city life, was a complete lifestyle change especially as Dan also changed jobs to work locally to his new home. 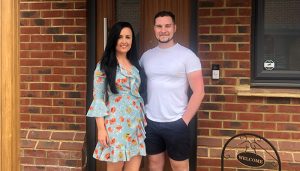 After saving hard for their deposit, Dan and Rachel were keen to take advantage of the Government’s Help to Buy equity loan scheme which enabled the young couple to secure a home for their future.

“We’ve ended up spending the same on a mortgage that we were spending on rent but now our money’s going towards a home of our own,” said Rachel. “We’d been looking online and had seen Woodgate on Instagram and we thought it looked really modern and a bit different.

Falling in love with Woodgate

“By July we’d decided to go forward with Woodgate even though we hadn’t stepped inside yet! There were show homes open to look around but we already knew this was the place for us by the look of the development, the location and even by the correspondence we’d had with Karen, the Sales Consultant, who really put us at ease. She was extremely helpful in explaining terms that, as first time buyers, we weren’t familiar with. It was all very reassuring and gave us confidence that this was the right choice.”

Rachel and Dan narrowed their choice down to three different house designs but after a few days after their visit, they received a call to say the home at the top of their list was also of interest to other potential buyers.

“We didn’t want to miss out so we quickly got everything together. As the home we liked was still being built, the Sales Consultant had kindly video’d a similar house design for us which was already finished. Then we confirmed our reservation off-plan that same evening with a direct bank transfer for the reservation fee,” said Rachel. “It was very straightforward and the Sales Consultant was on hand even after hours to make sure everything went through.”

“The communication by Thakeham has been 100% throughout,” added Dan. “On moving day, Karen asked us to phone when we were five minutes away so she could walk across to the house and meet us there as soon as we arrived. She made sure we were happy with everything and then left us to settle in. It was the perfect welcome. Thakeham’s service really is above and beyond.”

Thakeham even provided a welcome hamper with a bottle of prosecco from the Sussex vineyard at Bolney and a selection of goodies from the local farm shop to welcome the Vandykes to Woodgate.

Rachel and Dan, who were married 18 months ago, settled on ‘The Handcross’, an attractive 3 bedroom house with a separate living room and an open plan kitchen/dining room. As well as a garage, the house also features an ensuite to the principal bedroom and benefits from a downstairs cloakroom and plenty of storage.

“The Handcross felt like our family home not a stepping stone house,” said Rachel. “We don’t know ourselves with all this space!”

The couple chose a contemporary grey and marble interior design colourway which was included within the price of the property and they were particularly impressed with the balanced blend of traditional and modern styling in the architectural features and finishes. Flooring was included throughout and all the kitchen appliances were fitted. Dan is a keen cook so the eye-level oven was an added bonus.

Images of a Thakeham Showhome at Woodgate

“I love cooking so having an open plan kitchen is the best part of the house for me. Hosting guests was almost impossible in the flat we lived in previously and we didn’t have space for a dining table,” he said. “Now we have an open plan kitchen/dining room and doors out to the garden, so we had a dining table delivered the day after we moved in!”

For Rachel, it was the garden which appealed most. “Our flat in Croydon was upstairs but I’d always dreamed of walking out into a garden of my own. Sometimes I’ll just stand out there and take it all in, I can hardly believe it’s ours. Having the garden is a real benefit and we can’t wait to have friends round.”

Rachel is a secondary school teacher and drives to work via the M23 while Dan is now working nearby on the new Woodgate Primary School where progress is going well.

“Working in the construction industry, my mind was instantly put at ease in terms of quality management as soon as we drove in to Woodgate. The site was clean and tidy, the roads were all finished in areas where people had moved in. Often roads aren’t fully completed until the very end of a project but Thakeham top the roads section by section as people move in so it never feels like you’re living on a building site. That care and attention filters right through to the finish of all the little internal details as well.” 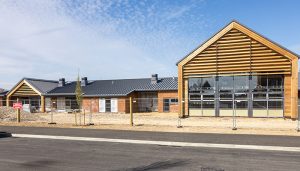 Woodgate Primary School will be welcoming pupils this September

First time buyers Dan and Rachel moved into their new Woodgate home at the end of January and are delighted with their home and the new lifestyle it has brought.

“Coming from Ireland, I’ve always felt that community is really important and we didn’t really have that in London,” said Rachel. “We wanted a community and here we’ve already made friends with two sets of neighbours. You feel like you’re living in the countryside but in five minutes you can be in a more built up environment of Crawley or Horsham and Woodgate is definitely commutable too, you can be in London in an hour.”

Dan said, “Or you can just go for a cycle after work through Tilgate Park. This is the great work/life balance that we were looking for and we’ve found it at Woodgate.”